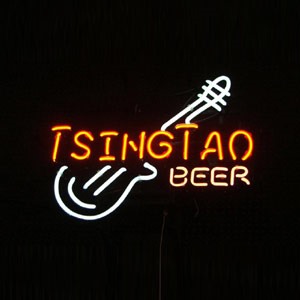 To say beer in chinese generally you'd just say Tsingtao ?? (pronounced ching-dow) since it's pretty much the best beer in China, however if you're in some odd place they may favor a local brew like Harbin up north or Pearl near the pearl river area in Guangdong. Beijing has a brand that totally rips off the Tsingtao look and taste but I can't remember the name at the moment, if you know it please put it in the comments.

So the word for beer in Chinese is píjiu in (pinyin) or pee-gee-oh (say the oh part fast) ??.

If you want it in a bottle say "wo yao ping qingdao", if you want the big bottle add the word da after yao and before ping. Most places just have the big bottle so thats sort of an unnecessary step.

If anyone knows a cooler way of saying beer please enlighten me. For instance in the United States we might call them Frosties or barley pops.

If you have a 7-11 nearby and know how to say your address just call up and say "song dao wu ping qingdao, <say your address here>". You'll have to order about 5 or 6 because they don't like to deliver anything under 30 Yuan.

I see that this page cannot render chinese characters, which as a chinese man really offends me